Here are the latest betting tips and tricks on how to win Mcheza jackpot games. The Mcheza jackpot consists of 13 pre-determined matches. The games are drawn from 277 leagues that include the German Bundesliga, UEFA Champions League, the very popular English (UK) Premier League, Italian Serie A and Africa Cup of Nations (AFCON).

Expect to see several African matches in the next SportPesa and Mcheza jackpots due to the fact that the AFCON 2017 tournament is heating up. The 2017 Africa Cup of Nations in Gabon will be the 31st edition of the top African football contest. Kenya is placed in Group E with Congo, Zambia and Guinea Bissau. Harambee Stars will play Guinea Bissau on Wednesday (today) while the return leg will be on Sunday, 27th march 2016. This is one of the 13 Mcheza jackpot games this week.

Other 2017 Africa Cup of Nations qualification matches in this week Mcheza jackpot include Cameroon vs South Africa, Ghana vs Mozambique and matches involving Cape Verde, Morocco, Zambia and Congo. How to win Mcheza jackpot this week? Just follow the following football jackpot tips.

It is hard to win Mcheza jackpot, SportPesa jackpot or any other jackpot. However, the following tips and tricks should make your betting life easier. 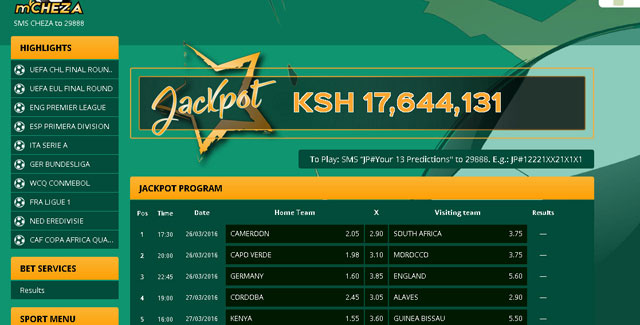 Here are a few proven tips and tricks on how to win Mcheza jackpot.

You win a big jackpot bonus if you correctly predict 10 or more matches in the 13 SportPesa and Mcheza jackpot games. These are some of the top betting tricks and Mcheza tips to follow if you are wondering how to win Mcheza jackpot.